The title of this event refers to the Latin 'Hic sunt leones' – a term used in medieval ages to designate unexplored territories and ‘blind spots’ where humans have not entered yet. When stepping to such zones one can either start to close up and be worried or open to learn and gain new experiences.

Farm in the Cave and DOX Centre for contemporary art invites everyone to come, to enjoy not only the physical space of DOX, but also to share and to open the minds to the new adventures of getting to know each other. What courage do we need in order to admit that the lions live in us?

Magda and Zuzanka share their little lives with each other in telephone conversations. The first cannot exist without the other, while her friend is completely self-absorbed. Why are they still communicating at all, what keeps their friendship alive? Fragments of their absurd relationship appear in a kaleidoscope of situations from other lives, lived without recognizing their sense and direction, between fun and powerlessness, narcissism and fear of death. The present alternates with the past, rejection with the desire for closeness. Time passes - the elevator goes up – at some point the party has to end… We have grown old. Does that surprise us?

Rerun of the show Together Forever which was co-created with the community of Prague seniors in 2017 in the frame of the Caravan Next project. Senior-performers have become an integral part of this production and are considered to be an equal partner to the professional performers. What has changed since then? The performance keeps on developing and changing.

The performance will be accompanied by post-performance discussion from 8pm.

Almost every Tibetan can walk can also sing. And whenever they get together, they dance. Dance as a freedom no-one can ever take from them. Traditional nomadic dances under the guidance of Tibetan performer Rin Kin. The workshop is open to all regardless of age and prior experience and is held in English.

“We need to articulate our reality in a model that appropriately reflects our daily experiences as a people living under occupation and as refugees.”
Exiled poet Bhuchung D Sonam

Are you familiar with the work of contemporary Tibetan poets? Have you heard Tibetan rap? Young Tibetan artists, writers, photographers, dancers, and filmmakers all play an important role in examining what it means to be Tibetan.

Kate Saunders is a writer and Research Director for the International Campaign for Tibet, the largest Tibet-related international monitoring and advocacy organization. She is a founder of the Laogai Research Group in the UK and worked for the release of Harry Wu, a Chinese prisoner, in the late 1990s. Her articles have been published in newspapers and magazines worldwide including The Times, The Sunday Times, The Washington Post, and The Independent.  She has authored or co-authored numerous reports on Tibet and the book Eighteen Layers of Hell: Stories from the Chinese Gulag(Cassell, 1996).

This time the Gulliver Airship will fly to remote locations where members of Farm in the Cave drew inspiration for their performances. Music, video, and powerful images presented inside the Gulliver Airship and on the roof of the DOX Centre. Video projections will feature friends of Farm in the Cave in Amazonia, eastern Slovakia, Andalusia, and northern Brazil whose stories, rhythms, and dance steps inspired members of the group. Through songs, fragments of performances, and videos from their trips, Farm in the Cave will guide viewers through a map of blank spaces where experience and wisdom that we all have long since forgotten were passed on in forgotten communities.
Featuring members of the comapny, together with non-actor seniors, students, musicians, members of the Disman Ensemble, and jazz virtuoso Marcel Bárta.

CARAVAN NEXT, project that Farm in Cave takes part in, is a large-scale Social Community Theatre collaborative project connecting professional artists with communities and local citizens in a network of theatre organisations and cultural institutions all over Europe.

From September 2015 till February 2019 local citizens in min. 75 European locations will meet in theatre - and culture activities to reflect both artistically and socially upon the European challenges of the third millennium.

The result will be more than hundred performances and an endless number of new social relations created in a European network in the frame of social community theatre. The project is co-funded by the Creative Europe Programme of the European Union. Read more about Caravan Next on www.caravanext.eu.

"The European Commision´s support for this project does not constitute an endorsement of the contents which reflects the views only of the project creators, and the Commision cannot be held responsible for any use which may be made of the information contained therein."

Also supported by: Ministry of Culture of the Czech Republic, State Fund for Culture, Prague 7,  Nadace Život umělce.
Farm in the Cave is supported in the year 2018 by a grant from the City of Prague in the amount of CZK 2,500,000. 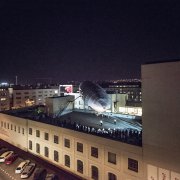